I Dream of Genie

Market Urbanism has a post on another scary proposition being floated in that bastion of government regulation-- New York City. It seems that the city isn't satisfied that the cost of housing has driven the middle class from the city. Now they want to drive small businesses out as well.

A city councilmember planned to introduce a bill this week that will require small businesses and landlords to submit to arbitration in negotiating lease renewals if both parties can’t agree on a fair rent.

The far-reaching measure, sought by Upper Manhattan Councilmember Robert Jackson and deemed by some as a form of commercial rent control, would set regulated increases not subject to landlords’ whims.

Rent control may be a foreign idea to most Houstonians. It basically grants government the right to lock rents at some fixed rate, which means landlords cannot charge market rates, and tenants cannot bid higher rates to live where they choose. The result is the lack of affordable housing in NYC, which is sadly ironic, since the purported purpose of rent control is to provide affordable housing. The same will happen with retail space:

The fact that rent control of housing didn't work as planned won't stop politicians from pushing for more regulations. If reality were their guide, they would recognize the right of individuals to use their property as they choose. Instead, politicians proclaim some imaginary "right" to affordable housing, or affordable health care, or anything else than can gather a large constituency (read, lots of votes).

But the real issue isn't political. The real issue is moral. A large part of the public sees nothing wrong with forcing others to provide for their wants and desires. And there is a steady stream of politicians all too eager to propose laws to grant them their wishes. They think that their wishes can somehow transform reality, that if they pass a law with the intention of creating affordable widgets, affordable widgets will result. They think that politicians are nothing more than genies who can grant their wish simply by writing a law. It doesn't work that way. Reality is not malleable to one's wishes.

Our culture is saturated in altruism-- the belief that morality consists of service to others. And those who refuse to "voluntarily" serve others, that is sacrifice their values, may properly be forced to do so. If landlords will not offer affordable rents, then we will make them do so (even if it means they won't be able to afford to maintain their properties, in which case we will call them slum lords and impose more controls on them).

Altruism is a hideous disease. It imposes an impossible standard, and then inculcates guilt when its adherents inevitably fall short. Nobody can completely and consistently practice service to others. You could not live in a nice house when others are homeless. You could not drive a nice car when others must depend on public transportation. You could not enjoy a night at the movies, because that money could be spent to feed someone. Indeed, you could not eat so long as others are hungry.

Each individual has a moral right to live for his own happiness. He has a right to the fruits of his labor. He has a right to pursue his values without intervention from others, so long as he respects their mutual rights. Human beings are not sacrificial animals.
Posted by Brian Phillips at 6:33 AM 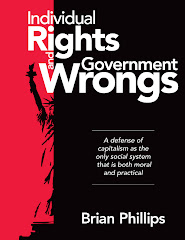